The Anatomy of Figurative Motifs 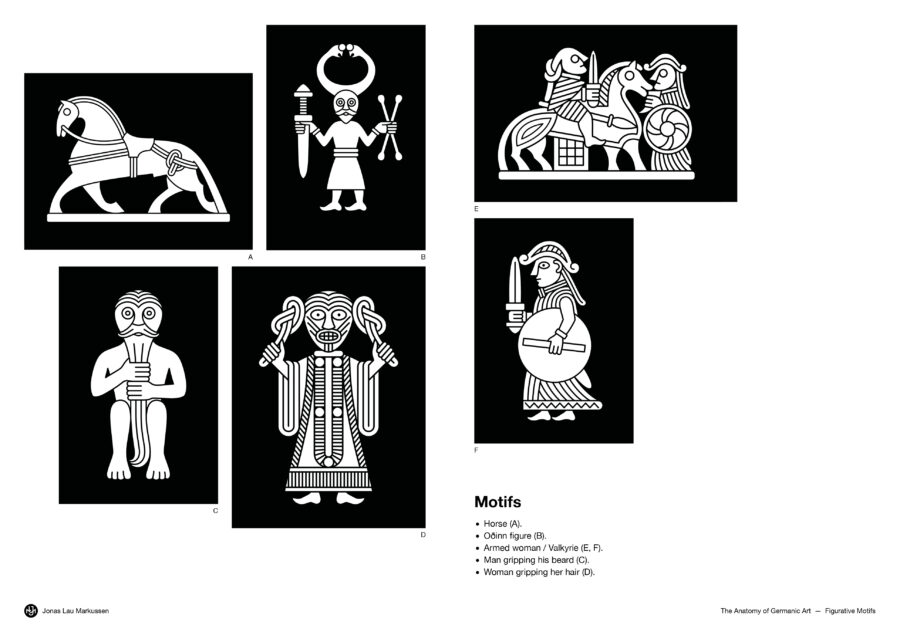 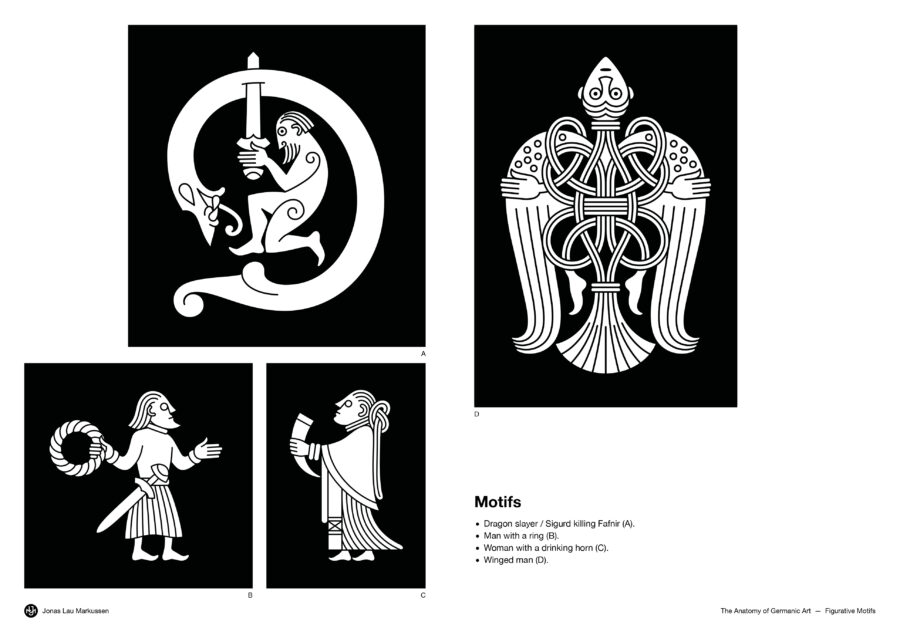 Figurative motifs play an essential role in the decorative art of the Germanic Iron Age (c. 400-800) in tight combination with the animal ornament, especially in the first half, exemplified by the imagery of the gold bracteates and helmet plates.

However, moving into the Viking Age, animal ornament with its ribbon animals and gripping beasts take centre stage in decorative ornamentation, pushing the figurative motifs into a secondary role. While figurative art is featured side by side with the animal ornament, as seen on the prestige helmets, in Germanic Iron Age art, it is often absent or plays a supporting role in the Viking Age. It is only in the post-conversion late Viking Age art that figurative motifs regain prevalence in the role of being juxtaposed with animal ornament. Although, now, in a more representative symbolic manner than earlier, as seen on several runestones, not least on the greater Jelling stone with its depiction of the crucifixion of Christ.

A confident emphasis on the transformative shape-shifting characteristic of animal ornament seems to be the overwhelmingly popular choice in the late Germanic Iron Age and Early Viking Age art. When figurative motifs occur, they usually underscore or play directly into this focus on magical transfiguration and the performance of liminal power.

Horses are not surprisingly a common motif both in Germanic Iron Age and Viking Age art, from the C-bracteates to the runestones.

They are often mounted, but they also occur riderless, usually pacing and either with or without tack. A horse featuring tack and saddle is significant, as it marks it specifically as a trained steed and presumably a warrior’s horse, as seen on the battle scene of the helmet plates.

Male horses have been shown to be preferred for burial sacrifice in the Viking age, and the male gender of a horse figure is often explicitly indicated by its genitals.

The type of single horse motif may have Carolingian influences, though horse depictions were common throughout Europe, including Scandinavia.

The popular Oðinn figures of the Germanic Iron Age still occur going into the Viking age. However, the visual representation of the Oðinn complex seems to shift towards a preference for armed women, most likely valkyries, in the early 9th century, instead of the half-naked spear-bearing men with horned headdresses accompanied by beast-headed men.

The valkyries usually have their hair in a knot and a long ponytail in accordance with women’s fashion, as well as wearing a long dress and apron. Disc-on-bow brooches occur too. In addition to that, they carry shields, swords and helmets, which conventionally belong to the masculine sphere of warfare in early medieval Scandinavia.

Valkyrie depictions span across a spectrum of variations with three motifs composing the main pillars; an armed mounted woman, an armed woman on foot with a shield and sword and a woman in normative women’s attire carrying a drinking horn.

A common configuration is that of an armed mounted woman being received by an armed woman on foot with a shield presenting the rider with a drinking horn.

This motif has a direct relative on the contemporary Gotland picture stones, where a man on an often eight-legged horse is received by a woman in female attire welcoming him by holding forth a drinking horn.

The motif on the picture stones is most likely a scene from the Völsunga saga with Sigurd the dragon slayer on his horse Grani, a descendant of Oðinn’s eight-legged horse Sleipnir, and the valkyrie Brynhild/Sigrdrífa.

Below the stomach of the mounted valkyrie’s horse hangs a square cloth divided into nine equal sections.

In the sagas (Jómsvíkinga saga and Darraðarljóð), it is described how a group of valkyries work together to weave a piece of cloth on a loom before heading out to the battlefield to collect the slain.

The loom’s frame is made of spears, and the shed stick is a sword. The warp and weft are made of the intestine of men, and the weights are skulls.

When they are done weaving, they tear the cloth apart, each taking a piece of it with them.

The craft of weaving belongs to the realm of women in early medieval Scandinavia and is directly connected to seiðr, the practice of magic and divination. The word seiðr originally meant string, ribbon or thread.

This connects them directly to the ambiguous and fluid group of norns and disir, all deities tied to the realm of women.

Until the images of valkyries appear in the 9th century, there are no previous examples of depictions of armed women in early medieval Scandinavia.

The societal expectation of the time was to act in accordance with one’s assigned gender. Crossing the boundaries of the binary gender roles was usually harshly condemned and could have severe negative implications for the individual, as well as their family.

However, the act of gender transgression was also an act of stepping into a liminal and supernatural space. At the same time, extremely dangerous and uncontrollable, as well as extraordinarily magical and thus exceptionally powerful.

The valkyries, by taking up arms and thereby acting in a distinctly masculine manner while at the same time engaging in normative female activities like weaving and wearing dresses, clearly operate in this liminal and extra-potent, hyper-fertile supernatural space.

Woman with a Drinking Horn

Depictions of female figures carrying drinking horns and cups are known as far back as the gold foil figures of the 6th century.

They most notably pop up on the Gotland stones and the valkyrie pendants of the 9th century and later again on the Sigurd stones of the late Viking Age.

Although they are usually dressed exclusively in women’s wear, they seem to be directly connected to the mythological valkyries, notably in the Völsunga saga where Sigurd meets the valkyrie Brynhild, a scene depicted plenty across the span of the Viking age in which she is usually shown in a dress holding forth a drinking horn to greet Sigurd.

The gesture of gripping one’s own hair or beard appears to have been introduced in the early Viking Age and seems to have magical connotations and links to shape-shifting.

Ribbon animals gripping their own and other animal’s limbs were already prevalent since the migration period (Style I and onwards). But the hair and beard gripping gesture emerges with the gripping beasts of Style III E/Broa style (c. 750-825) and further develops and increases its prevalence through the Oseberg and Borre styles (c. 800-950).

Several depictions are known of human figures viewed from the front grasping the pigtails of their centre-parted hair, one in each hand. The pigtails are typically tied in pretzel knots at the root.

The figure’s mouth is usually accentuated in some way with lines around or across it, sometimes resembling gritting teeth, and some have a tongue-like shape protruding from it.

Although the long hair and knots, as well as the long robes the figures wear, are usually feminine signifiers, the gender is still somewhat ambiguous. It is, for example, not always clear if the lines around the mouth are meant to depict some kind of beard.

The motif is predominantly dated to the 9th century, but a related motif can be seen on the so-called ‘Snake-witch stone’ with a design in Style II B (c. 550-650) from around 600 CE found at Smiss on Gotland. The figure on the stone wears the same hairdo with tied pigtails, but instead of gripping their hair, the figure is gripping two snakes positioned on each side of the head with their heads in profile facing the figure. The composition of the Smiss stone mirrors that of the motif of two beasts flanking a male warrior seen on several helmet plates.

The accentuation of the figure’s mouth and the connection to the motif on the helmet plates hint at a figure engaging with magic and linking it to the practice of shape-shifting.

A seated male figure grasping his long beard is a recurring motif in the Viking Age.

Figures gripping their beard originate in the gripping beasts of the Broa style and are especially common in the Oseberg style. The gesture continues into the late Viking Age in the shape of what seems to be board game pieces of seated men grasping their phallic beards, sometimes even featuring an erect penis.

Winged men are a common motif in the Viking Age, not least on several scabbard mounts from the 10-11th century, and bird brooches with male faces on their backs are even known from a couple of centuries before the Viking Age. Both are obvious expressions of the practice of shape-shifting, and magic feather cloaks are well-known in mythology and the sagas, where several of the Æsir and Jotnar transform into birds to travel through the skies and transcend the boundaries of the natural and supernatural world. Especially the stories about Völund the smith (Völundarqviða and Þiðreks saga) is noteworthy when it comes to visual man-bird depictions, as he is clearly the one taking the shape of a brooch from Uppåkra, Sweden, probably from the 9th century, and scenes from the story about him are also pictured on the Gotland picture stones.

In the myth, Völund is linked to the valkyries, as he is married to one capable of taking a swan’s shape. The fact that he is a smith and creates both riches and magical items like his ‘feather cloak’ even ties him to the mythological dwarves.

Common to most of these depictions comprised of simple but effective interlace knots composing a man in a feather-cloak contraption is that it is unclear where the man’s body stops and where the bird begins. They are literally merged.

On the Gotland picture stones, Völund’s story is juxtaposed with scenes from the Völsungesaga featuring Sigurd, who was raised by the dwarf Reginn, and the Valkyrie Brynhild. The common theme is revenge; Völund takes revenge on King Nidud, who captured him, and Brynhild on Sigurd, who betrayed her.

The Völsunga saga featuring Sigurd, the dragon slayer, was popular in the Viking Age. Scenes from the story are depicted on several Gotland picture stones and multiple runestones. Especially the event of Sigurd slaying the dragon is prevalent among the Völsunga saga runestone depictions.

Although the events of the saga take place centuries before the Viking Age, while Scandinavia was heathen, it is still exceptionally popular and prominently featured on Christian stones raised after the conversion.

The fact that the Völsunga saga revolves around heathen deities and mythological themes and figures was apparently unproblematic in post-conversion Scandinavia. However, this might be possible because the central figures of the saga break with old traditions in the narrative. It was, perhaps, even possible to see Sigurd acting as a symbol of Saint Michael’s dragon killing.

Man with a Ring

The figure of a man in profile holding a ring in one hand is known from little pendant figurines and several rune stones. He is placed opposite a woman with a drinking horn facing him on the stones. Above them is the scene of Sigurd piercing the dragon, Fafnir, with his sword, Gram.

A plausible interpretation is that the two figures depict the meeting of Sigurd and the valkyrie Brynhild/Sigrdrífa after he kills Fafnir. The cursed ring Andvaranaut in his hand represents the treasure he won by slaying the dragon, as well as his impending betrayal of Brynhild. A betrayal that will ultimately lead to their death through Brynhild’s revenge.

(Will be updated asap)