The Anatomy of Gold Bracteates 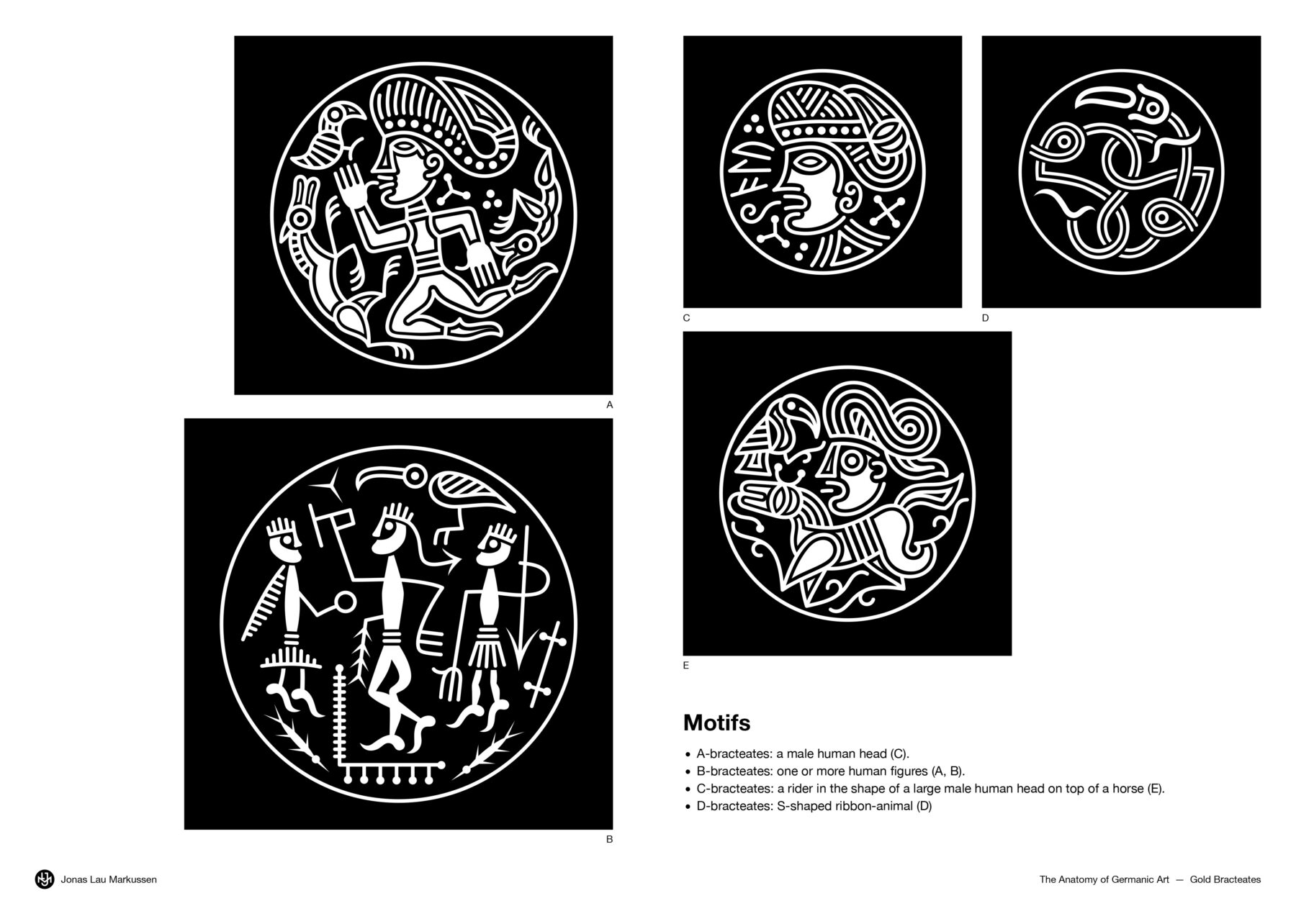 Gold bracteates are round gold pendants usually worn as part of a necklace with several pieces, either separated by pearls or knots or hung from loops or short chains.

Whole jewellery sets are virtually only found in female graves. Individual bracteates are exceptionally also found in male graves. But they are usually modified to look like coins and placed in the hand or mouth of the deceased, probably to function as ‘Charon coins’ to provide safe passage to the afterlife.

The bracteates were stamped with dies with negative relief, as opposed to the later gold foil figures, which were made using punches. The gold used to produce the bracteates came from the Roman Empire in the form of coins, primarily solidi, which were of high value.

The gold was hammered out and annealed, then placed on top of the die with a pad of leather or cloth laid on top of it. The gold was then stamped repeatedly with a hammer to create the impression with the motif on the bracteate.

The rim was trimmed, and border zones were punched in. Rim wire was soldered to the outer edge of the disc or the front. The rim wire usually consists of a beaded gold wire, but even or twisted ones are also known. The ends of the rim wire were then hidden by the loop.

The function of the bracteates was multifaceted. They were at the same time valuable jewellery, status-giving symbols of the ruling class, Nordic identity markers in relation to the outside world, expensive gifts obligating the recipient to reciprocate, suitable objects for sacrifice and protective amulets associated with Oðin.

The bracteate’s focus of depiction is overwhelmingly on a male figure commonly interpreted as Oðin performing his role as a shamanistic divine ruler-figure transgressing the boundaries between human and animal form and exceeding the norms of gender roles with his seið abilities.

The runic ‘formula words’ like ‘alu’, ‘laþu’ and ‘laukaR’ often featured as part of the composition emphasise the amuletic function of the bracteates.

The bracteates are directly inspired by Roman coins and medallions with their imperial portrait. Some bracteates even have letter inscriptions where the Roman original can be clearly recognised.

It is evident that the Scandinavians who created the motifs on the bracteates understood essential features of the Roman iconography. The qualified translation of the pictorial world of the Roman coins into their Nordic equivalent is crafted very deliberately and selectively, and the Scandinavians have obviously put their own symbolic meaning into the motifs in the process.

It is noteworthy that the short hair of the Roman Emperors is quickly replaced by artful long-haired hairstyles on the bracteates. Long hair was not prevalent on earlier nor later Scandinavian male depictions and might have been a ruling symbol in the Nordic regions inspired by the hairstyle of contemporary long-haired Merovingian princes.

The fact that the motifs of the bracteates are directly derived from Roman coins and finds of several hoards containing Scandinavian bracteates, as well as Roman coins, creates good conditions for dating.

The gold bracteates furthermore appear simultaneously with Style I and disappears again with the transition of Style I into Style II B, and the stylistic features of the bracteates fit squarely into the framework of Style I.

A-bracteates features a male human head, occasionally accompanied by a bird or other animals.

The motif of the A-bracteates is modelled on the profile effigies of the Roman Emperor in civilian clothes as depicted on Roman coins. Features such as the imperial cloak, the emperors lifted hand, the round imperial brooch and especially the imperial diadem is recognisable on the Scandinavian version.

Despite their Roman model, it is, however, not the Roman Emperor who’s depicted on the A-bracteates. It is, instead, widely interpreted as a depiction of Oðin.

B-bracteates features one or more human figures, often accompanied by birds and other animals.

The Trideity-bracteates (‘Drei-Götter-Brakteaten’) featuring three human figures has been interpreted as depicting the Nordic myth of ‘the Death of Balder’. Balder supposedly stands in the centre with the deadly arrow in his chest surrounded by Oðin and Loki. The weapons used to throw at Balder, who was thought to be invincible, is scattered around him.

The composition is probably created by combining Roman motifs of ‘Victoria crowning the Emperor’ and ‘Mars Ultor’ depicting Mars with a downwards-facing spear and dressed in coat of arms and a skirt similar to the Emperor’s.

Another notable type of B-bracteate motif depicts a man with his hand in the mouth of an animal with sharp teeth. This is supposedly a depiction of another Nordic myth in which the god Týr sacrifices his right hand in the mouth of the Wolf Fenrir to bind the beast and thus preventing or postponing Ragnarók.

C-bracteates features a rider in the shape of a disproportionately large male human head on top of a horse. The head is equivalent to the ones depicted on the A-bracteates. Typically a bird is set in front of his face, and other animals also occur.

In line with the similar motif on the A-bracteates, this is usually interpreted as Oðin, either on his horse Sleipnir or in the act of healing Balder’s wounded horse as described in the Merseburg II Formula.

The gold bracteates are clearly a product of the aristocratic elite of Scandinavia and gather in areas that have a centre-function, like Gudme and Ripa. The bracteates are probably to a large extent found in the areas where they are produced.

Both in England and on the continent bracteates must have been produced. However, the reference is the Nordic models. Bracteates from the English finds are either imported or imitations of the Nordic ones.

Get notified when this article is updated