The Anatomy of Gold Foil Figures 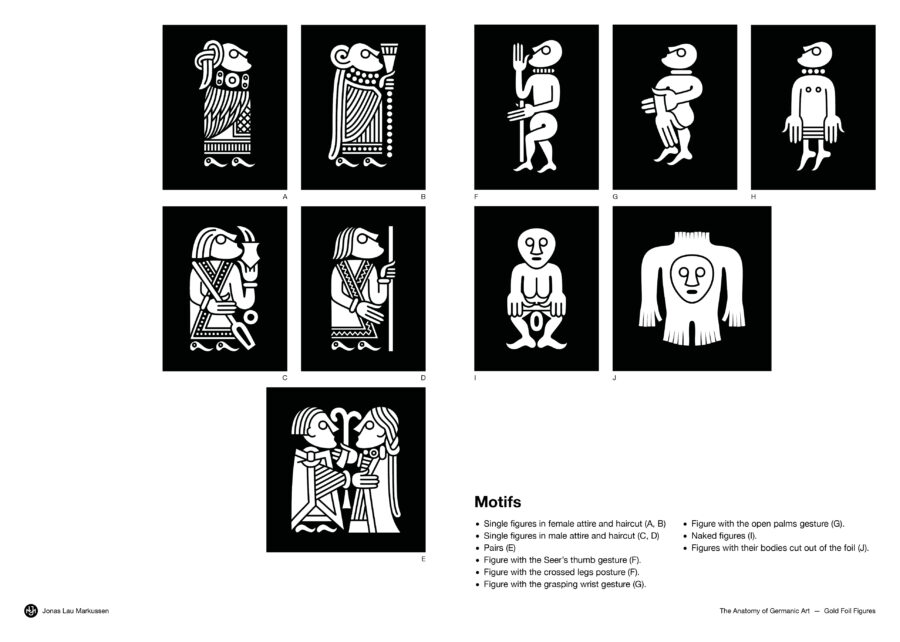 Gold Foil Figures are tiny sheets of gold with stamped depictions of mostly human figures, either singular or in pairs.

They are typically found in and around post-holes of notable buildings in central settlements. Others have been found in bogs or natural wells, and a few as part of burials and hoards.

Unlike most of the Gold Bracteates, the Gold Foil Figures are often made of low-grade gold alloys, making the foil less malleable and brittle.

The foils are usually less than 50 mm in size and under 1 mm thick. The motifs were stamped into the gold sheet from the backside using a positive bronze die (patrix), and the excess material was cut after stamping using a knife.

More than 725 unique die impressions exist (including 22 dies), with the most popular examples producing more than a hundred stamped foils each. Most dies, though, are only represented by a few stamped foils. 89 cut figures also exist.

Further modification of the figures after their initial production is not unusual. Details could be scratched or punched in. Tiny strands of gold might be added to feature as jewellery or genitalia, and the foil could be bent, for example, to mimic a seated position, or crumbled up or even torn into pieces.

The exact function of the Gold Foil Figures is disputed. The most typical find context is in and around postholes of notable buildings, especially temples like the one in Uppåkra, Sweden. Others have been found at a natural well in Bornholm, Denmark.

These contexts, often with direct connection to places of veneration, point to the primary function being votive offerings, either deposited in conjunction with the erection of central profane and sacred buildings or at devotional sites in nature.

Gold was regarded as a material with magical capabilities connected to divine powers, and in mythology, dwarven smiths were known for creating material things and animated beings.

The alteration of the figures after their initial creation by the smith may indicate that the Gold Foil Figures might have been perceived as a kind of magical beings in their own right with performative capacity, rather than only mere symbolic representations of deities or people.

The images of the foils are, in many ways, a direct development of the style of the Gold Bracteates, possibly incorporating further classical motifs while maintaining a distinctly Scandinavian style.

Gold Foil Figures are difficult to date. Excavations at Sorte Muld and Uppåkra suggest c. 525 to 700. Some have been associated with Viking Age contexts, but this should be viewed with caution as they could have easily been deposited earlier.

Stylistically, the Gold Foil Figures are within the category of Style II B, which also points to them emerging in the first half of the 6th century and declining in production at the end of the 7th century.

Gold Foil Figures are found all over Scandinavia, and the vast majority of the 3243 figures are found in settlement areas in Southern Scandinavia, notably 2480 at Sorte Muld, Bornholm and 127 at the temple at Uppåkra. 22 bronze dies have been found, most of them at Bornholm, Skåne and Sjælland.

Although specific visual cues like hairstyles, attire and attributes are distinctly gender-coded, it is not possible in most cases to categorise individual figures as being unambiguously of either sex.

Among the known 644 single figures and 179 pairs, roughly less than half of them can be confidently categorised as either male or female-presenting, with a rather heavy lean towards male figures. Since the bulk of the figures may not be attributed to the male or female gender, this way of categorising does largely not seem to have been essential.

Gender ambiguity in any instance, as with the figures on the Gold Bracteates, could easily be a substantial quality rather than an error. Especially when it comes to the context of supernatural relation-making and ‘shamanistic’ practices, gender transgression was, although considered tabu culturally, undeniably imbued with magical capacity and power.

Although the kaftan featured on several foils is first known in Scandinavia from archaeological contexts from the Viking Age, the costumes depicted largely reflect real-world characteristics of the time. So much even that the figures have played an essential role in reconstructing the Scandinavian women’s dress from the Early Germanic Iron Age.

The female attire typically consists of various types of outer garments like cloaks or capes resting on the shoulders and are open in the front. Jackets also occur. The inner garments consist of long dresses. The hair is worn long and tied in a knot with a lengthy pigtail. Jewellery occur.

The male attire is typically composed of a long or short kaftan with an overlapping front. Outer garments like capes occur occasionally but differ from the women’s by being closed at the shoulder. The hair is worn shoulder-length.

Both genders wear the plain tunic-like shirt or dress. The man-woman pairs are sometimes even stylistically assimilated, presumably underlining the unity of the two persons. Occasionally to a degree of gender-neutral mirror images.

Trousers and sleeves are rarely articulated, although they are well-known garments from this period, and it is usually impossible to distinguish between cuffs and arm rings.

Female attributes are drinking horns and disc-on-bow brooches across the neck (often only represented by a few simple dots or a line).

Many hand and arm positions may be incidental or represent a neutral position, while other gestures probably convey some kind of meaning.

Some seem to imitate Antique and Late Antique gestures often shared with the bracteates, others have possible Christian affinities, and some are otherwise known only from later medieval descriptions or illustrations. Local regional Scandinavian influences are also reflected in the spectrum of gestures.

The thumb of the figure’s hand is placed close to or in the mouth, often seen in conjunction with crossed legs.

The gesture appears already on in Style I ornament and survived into the Viking Age as well as in Christian iconography as an expression of foresight or prophesy combined with an element of magic.

One of the figure’s legs is bent and crossed over the other straight leg.

The cross-legged posture is possibly apotropaic (averting evil) in origin.

The figure is depicted with its arms down the side and palms facing forward. This gesture is often seen in late antiquity Christian context (as with raised arms), where it is apotropaic or signals reverence, fear or submission.

The figure grasps around their wrist, thereby locking the hand.

A similar gesture is described in the Norwegian Konungsskuggsjá (King’s Mirror) from the middle of the 13th century: “When you stand close to the king, hold your hands so that your right hand encircles the left wrist”. It is also illustrated in the contemporary German manuscript of the Sachsenspiegel law collection, where a visitor stands in front of the seated king. The gesture demonstrates reverence in the presence of higher powers.

The Classical Abundantia motif is a predominantly ‘horn-shaped’ object appearing from the top of a beaker, implying that the person is drinking or carrying out a beaker filled to the brim.

It is impossible to convincingly link any figures directly to characters of the Nordic Mythology’s pantheon based on their appearance or attributes.

The female figure holding drinking horns, for example, is a common motif throughout Early Medieval Scandinavian art and culture with mythological connotations. But, it is also just a mundane and somewhat generic reflection and performance of the normative gender role of a contemporary woman.

It has been proposed that the pairs represent a sacred wedding, hieros gamos, similar to that of Gerd and Freyr, with references to fertility and regeneration.

Clues for interpreting some figures might be found in later medieval folklore from Southern Scandinavia. Especially in regards to the figures from Guldhullet, Bornholm. In contrast to other typical find spots of Gold Foil Figures, Guldhullet is a natural well, making it a common place in nature for the veneration of deities.

Naked figures with breasts and hollow backs, as well as headless figures with a face in their stomach, like those found in Guldhullet, might be related to elves (fairies) and trolls, respectively.

In medieval folklore, elven women are connected to lakes, streams and bogs. They are beautiful but dangerous creatures. They can enchant people, and sexual intercourse with an elf leads to losing one’s soul.

The elven woman Slattenlangpat (directly translates to ‘saggy-long-tit’) is described with her breasts hanging below her waist. Her long breasts symbolise fertility, and with them, she feeds her fish children by laying down on a rock or bridge by the river and tossing her tits out into the water.

Every night she is hunted and caught by the Nightrider, a figure with solid connotations to Odinn. Followed by dogs, he flies away with her splayed across his horse. The next night, she comes back to life, and the hunt starts over.

Thus a tiny elven woman in gold might have been a suitable sacrifice to Odinn, as this was what he put down on his nocturnal hunts.

The headless troll with a face in its stomach is known from later medieval depictions.

Folktales about Thor in conflict with trolls are especially known in Småland. According to legend, trolls sought protection in the houses of people.

A votive offering of a tiny golden troll to Thor may be interpreted as a preemptive measure. The household has thus given Thor a troll, so he doesn’t have to blow lightning down into the farm to kill the troll possibly hiding there.

Get notified when this article is updated