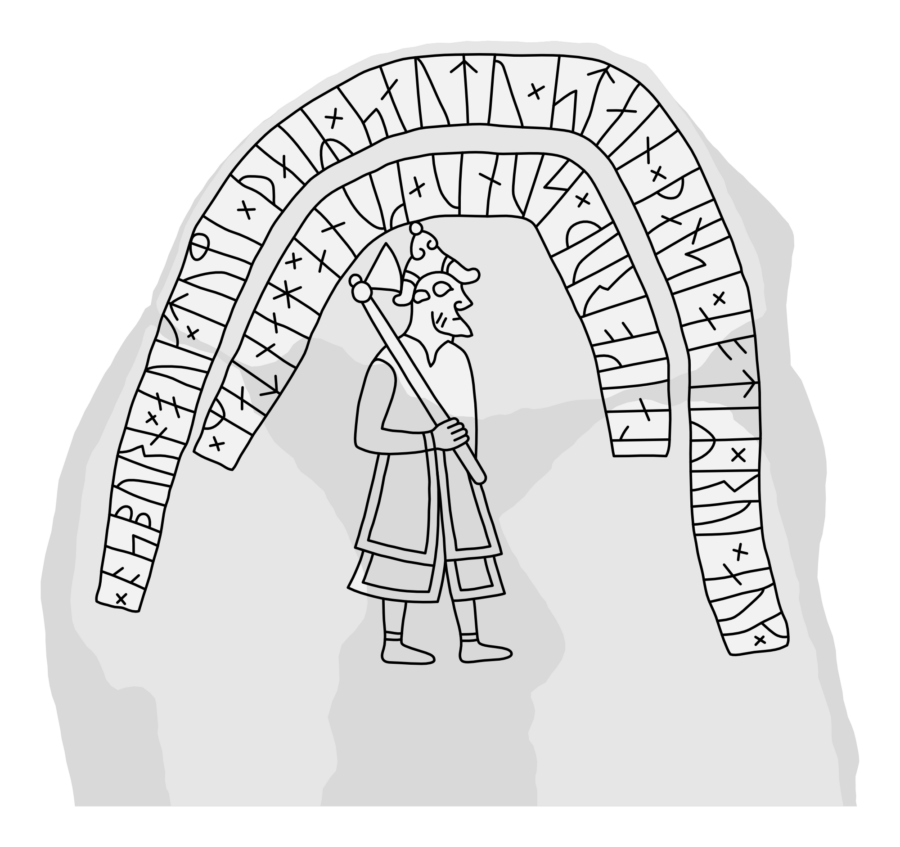 Ásbjǫrn and Tumi they placed this stone in memory of Hróir and Leikfrøðr, Gunni Hand’s sons.

The stone initially depicted a man carrying an axe on his right shoulder, dressed in what looks like distinguished robes and wearing a prominent pointy hat or helmet.

The stone was broken into several pieces sometime after the 1630s, and only the top part above the man’s chest remains today. However, the inscription of the stone was documented in Monumenta Danica by Ole Worm in 1643. The missing parts of the stone have been reconstructed here, based on Worm’s illustration.

It is not clear who or what this man is supposed to represent. He could depict a member of the Varangian Guard returning to Scandinavia in distinguished robes brought back from the Byzantine Empire. But he could also very well be a depiction of the popular St Olaf, whose defining attribute is an axe.

Very few depictions of single human figures on runestones are known. Nevertheless, another stone featuring a single male figure exists in Sövestad, only a few kilometres from Hunnestad. The Sövestad stone, DR 290, clearly depicts a churchly man holding a staff with a cross at the top and without martial features. The two figures bear noticeable similarities in their posture, appearance and style dating to the same period (c. 1010-1040). Thus the interpretation of the Hunnestad stone might also point in an ecclesiastical direction leaning towards a depiction of Saint Olaf. Therefore the priestly figure on DR 290 could be his bishop Grimkell. However, this is still only circumstantial speculation.

Olaf II Haraldsson (c. 995-1030) was king of Norway from 1028 until his death in 1030 when he was killed in the Battle of Stiklestad. He was canonised a year later in Nidaros (Trondheim) by the missionary bishop Grimkell.

A cult soon grew around his sainthood, and he became widely popular throughout Scandinavia for his alleged role in bringing Christianity to Scandinavia and especially Norway. As the legend around him grew, he became known for performing several miracles, associating him with healing capabilities and fertility.

In folklore, he was a popular figure known as a slayer of trolls and Jötnar and protector against malicious forces absorbing motifs of the heathen god Thor. In addition, saint Olaf is often depicted wielding an axe and a red beard, giving further associations to Thor and his hammer.

Thunder was auspicious throughout spring and summer, and St Olaf’s Day on 29 July immediately before the harvest seems to reflect fertility beliefs that may have been associated with thunder.

Thus, the legendary Olaf played an essential role as a transitional figure between Heathendom and Christianity, and his posthumous popularity encouraged the widespread adoption of Christianity in Scandinavia.

Numerous churches in Norway, Sweden, and Iceland were dedicated to him and several churches in England.

Olaf’s brother, Harald Hardrada, allegedly acquired wealth and reputation as a prominent member of the Varangian Guard of the Byzantine Emperor while exiled. He became king for a brief period after returning to Norway, before his demise at Stamford bridge in 1066.

So Even though Harald’s return from exile in the east most likely took place a few years after the stone was raised, it is not hard to see how aspects of the world he lived in could easily be reflected in the imagery of the stone. The interplay between concepts of kingship, sainthood and membership of the Varangian Guard were already well established in the imaginary world of the people who decorated and raised the stones in Hunnestad. The commissioner of the monument probably belonged to the Scandinavian nobility and was most likely well versed in operating in aristocratic circles with connections across Europe.

This stone is part of the Hunnestad Monument raised by a prominent family of the Gussnava area near Ystad.

Full description of the Hunnestad Monument