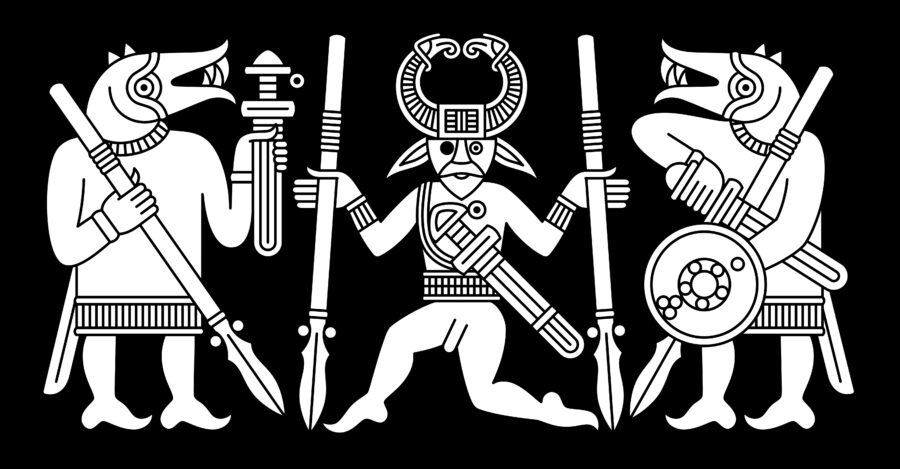 It is unclear if the figures on each side are wearing animal heads or if they are humanoid figures with animal heads. Nor is it clear, due to the stylistic rendition of the animal heads, precisely what kind of animals they are, though they are clearly predatory mammals with sharp teeth like bears or wolves and not boars or birds.

The beast-headed figures are armed, and one is holding a sheathed sword up in front of him as to give it to the Oðinn figure facing him. Their half man, half beast appearance and close connection to the Oðinn figure indicate that they are probably directly linked to berserkir.

Berserkir were known for their berserkergang (‘going berserk’) when they went into battle. Going berserk meant doing some kind of shape-shifting in which the berserkr gained superhuman animalistic powers and characteristics.

In the literature, berserkir took on particular roles. They were most notably elite members of the royal retinue, expected to be present at a pagan king’s court and to fight on his behalf, possibly as a champion or a member of his army. As elite warriors, they were usually seen in the front of the army and well positioned in the hall with high social status. In this role, they were both valued and feared.

The most iconic feature of an Oðinn figure is their headdress composed of two inwards-curling horns with bird-head terminals (clearly birds of prey), a large rectangular forehead piece and triangular animal-ear-like shapes protruding on each side of the head below the headdress.

The Oðinn figures usually carry downwards-facing spears, either two in one hand and a sword in the other or one spear in each hand. Though they occur dressed in caftans, they often appear naked, only wearing a belt and a sheathed sword in a baldric looping around their shoulder, sometimes even with exposed genitals. Their stance seems to be dancing or jumping, indicating motion.

The images on the helmet plates are all scenes pertaining to Oðinn’s domain of war, elite warriors, fate, magic and shape-shifting. Oðinn, as a central figure in mythology connected to magic, warfare and rulership, began to take shape during the mid-sixth century developing through the Viking age.