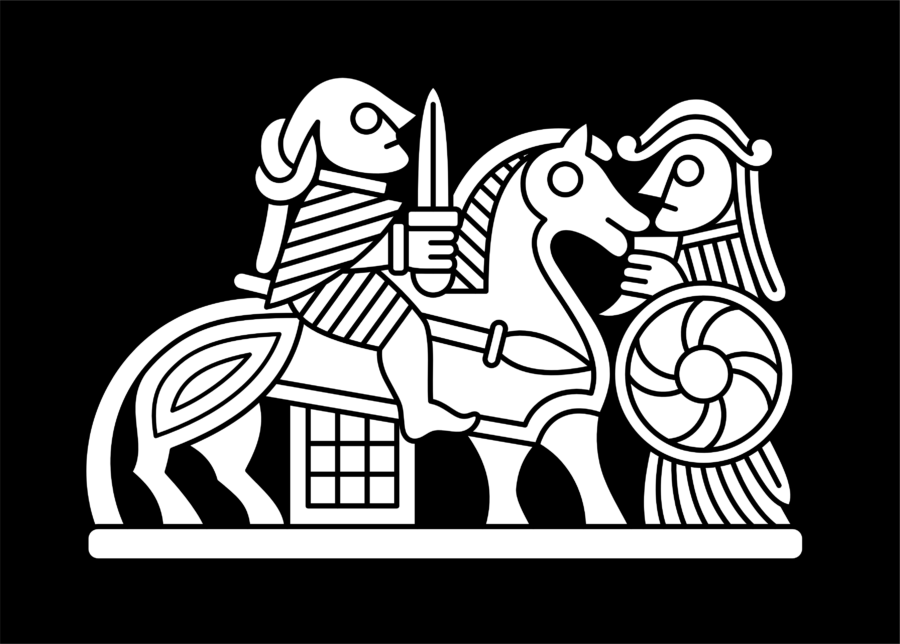 This illustration displays some typical characteristics of figurative motifs from early Medieval Scandinavia.

In the 9th century, valkyries seem to be the preferred motif representing the Oðinn complex.

They usually have their hair in a knot and a long ponytail in accordance with women’s fashion, as well as wearing a long dress and apron. Disc-on-bow brooches occur too. In addition to that, they carry shields, swords and helmets, which conventionally belong to the masculine sphere of warfare in early medieval Scandinavia.

Valkyrie depictions span across a spectrum of variations with three motifs composing the main pillars; an armed mounted woman, an armed woman on foot with a shield and sword and a woman in normative women’s attire carrying a drinking horn.

A common configuration is that of an armed mounted woman being received by an armed woman on foot with a shield presenting the rider with a drinking horn.

This motif has a direct relative on the contemporary Gotland picture stones, where a man on an often eight-legged horse is received by a woman in female attire welcoming him by holding forth a drinking horn.

The motif on the picture stones is most likely a scene from the Völsunga saga with Sigurd the dragon slayer on his horse Grani, a descendant of Oðinn’s eight-legged horse Sleipnir, and the valkyrie Brynhild/Sigrdrífa.

Below the stomach of the mounted valkyrie’s horse hangs a square cloth divided into nine equal sections.

In the sagas (Jómsvíkinga saga and Darraðarljóð), it is described how a group of valkyries work together to weave a piece of cloth on a loom before heading out to the battlefield to collect the slain.

The loom’s frame is made of spears, and the shed stick is a sword. The warp and weft are made of the intestine of men, and the weights are skulls.

When they are done weaving, they tear the cloth apart, each taking a piece of it with them.

The craft of weaving belongs to the realm of women in early medieval Scandinavia and is directly connected to seiðr, the practice of magic and divination. The word seiðr originally meant string, ribbon or thread.

This connects them directly to the ambiguous and fluid group of norns and disir, all deities tied to the realm of women.