The Anatomy of the Jelling Style A mix of wavy and almost circular curves. 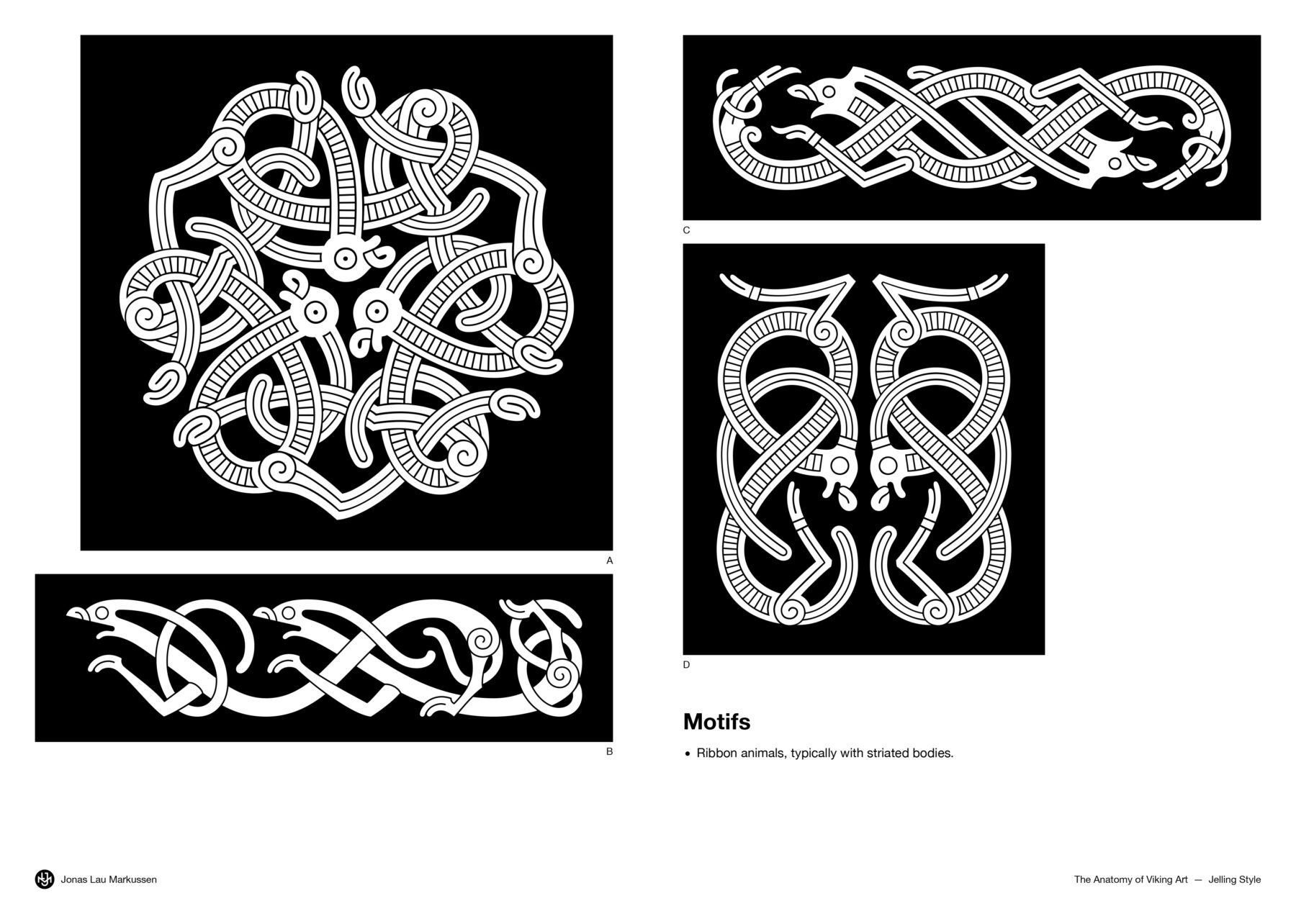 Rise of the Jelling Dynasty

English Control of the Danelaw

The Anglo-Saxon King Edward the Elder managed to take back most of the Danelaw except Northumbria, which remained under Norse rule. A few years later his son Eadred finally managed to gain control over and absorb Northumbria into the English Kingdom after the death of King Eric Bloodaxe, and in doing so ended the Norse reign in English territory.

Power in Denmark began to concentrate in and around the aristocracy of the Jelling area, on the Jutland peninsula. Gorm the Old is the first historically recognised king of Denmark. His wife Thyra is mentioned on a number of runestones in the Jelling area, particularly on the Lesser Jelling Stone, which Gorm raised in her memory. It is believed that when Gorm died, he was buried in the chamber of the North Mound in Jelling, built by his son and successor, Harald Bluetooth. However, Gorm’s remains were later moved from the mound to a final resting place under the wooden church built by Harald when he converted to Christianity.

After the death of Harald Fairhair, his son Haakon the Good returned to Norway to fight his half-brother, Eric Bloodaxe, over his claim to the throne. According to legend, Haakon was fostered by the Anglo-Saxon King Athelstan, son of Edward the Elder, as part of an agreement made with his father, Harald. In England, he was influenced by the Christian faith of the English people, which he brought back with him to Norway. Haakon gained the support of the Norwegian landowners by promising to cede the right to tax them claimed by his father. With his new-found support, he was able to force Eric to flee to the British Isles, where he eventually would be King of Northumbria for a few years before his death. Haakon later fought and was eventually defeated by Eric’s sons, supported by Gorm the Old.

Several of the trading towns such as Hedeby and Aarhus became the seat of a bishop under the Archbishopric of Hamburg and Bremen.

Following the death of Emperor Louis the Pious, the Frankish Empire was divided in three: West Francia, Middle Francia and East Francia. No emperor was appointed in the West for several years, until the crowning of the Saxon king, Otto I. Return of the Ribbon Animal

With the Jelling style begins a revival of the ribbon animal, eventually pushing the motif of the gripping beast into oblivion. Though often executed in fairly simple, juxtaposed and overlapping S-shaped layouts, and still drawing heavily on the highly geometric interlacing patterns of the preceding Borre style, such as the pretzel knot and chain patterns, the Jelling style is largely a return to the Norse traditions of animal ornament reminiscent of the Broa style, and even the earlier Germanic styles. The Jelling style ribbon animal was further developed in the subsequent styles, and various iterations continued to be in fashion right up to the end of the Viking Age. Compared to the subsequent iterations of the ribbon animal in the Mammen, Ringerike and Urnes styles, the anatomy of the Jelling animal is relatively simple and formalised, with its equal-width ribbon body, neck tendril and curly upper lip-lappet. All these components constitute the backbone of the style, and spill over into the subsequent styles, with the addition of their individual stylistic traits. And though the execution of the Jelling style may vary, and sometimes seem superficially unrelated, when one looks closer, the underlying structure is often revealed as strictly conventional. Thus, the style both pays tribute to the ribbon animal tradition of the past, and establishes the new tradition of future Norse animal ornament.

The early Jelling style is often found on disc brooches and circular pendants beside jewellery of approximately the same type, featuring Borre style decorations. The Jelling style designs often make use of Borre style compositional schemes, but instead of gripping beasts, they feature ribbon animals with their heads in profile, and neck tendrils.

This style got its name from a small cup that displays two overlapping S-shaped ribbon animals, found in the burial chamber of the North Mound of the Jelling monument site, and it is believed to have been part of the grave goods that accompanied Gorm the Great after his death.

The three horse-harness bows found in Mammen, Jutland and Søllested, Funen, display more elaborate and figurative ornaments, while featuring some of the Jelling style trademarks, such as the curled lip lappet and single neck tendril. They seem as though they may be later developments of this style, on the cusp of a transition into the Mammen style.